What is a Sugar Glider? 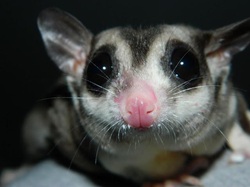 The sugar glider (Petaurus breviceps) is a small arboreal marsupial that is found in the forests of Australia, as well as in Tasmania, New Guinea, and the neighboring islands of Indonesia. This little creature is a member of the same order that includes kangaroos, opossums, wombats and Tasmanian devils!

The sugar glider has very thick soft grey mink-like fur with a black stripe that runs the full length of the body in line with the spine. This black stripe extends up and over the top of the head. The last couple of inches of the tail are also black. The glider also has dramatic black markings on the face, legs and back. The sugar glider's head and body measures five to six inches with a bushy tail of equal length. The adult glider weighs 4-6 ounces, with the male being the larger. All marsupials have several features in common. Among these are the structure of their reproductive organs, dentition and a short gestation period followed by a long developmental period for their young. Like most marsupials, the female has a pouch in which the baby glider is carried.

In the wilds of their native habitat, the sugar gliders are tree dwelling creatures, often living in groups of 15 to 30. They are active by night when they hunt for insects and small vertebrates and feed on the sweet sap of certain species of eucalyptus, acacia and gum trees. Sugar gliders are so named for their preference for sweet foods and their ability to glide through the air like a flying squirrel. They travel through the midnight tree tops by launching themselves into the air and transforming into a living kite by spreading out their sails of skin. They can make glides up to fifty meters and use their long tails as rudders to control the direction of flight. They have even been known to snatch an insect out of the air in mid flight. This gliding is made possible by a thin membrane of skin called a patagium that extends between their front and back legs.

Gliders have odd qualities such as opposable fingers and toes and the male glider has a forked penis. Their front feet have five fingers with sharp scimitar shaped claws. The hind feet each has a large opposable big toe. The next two toes are fused together (syndactylous) to make one toe with two nails. This toe is used as a grooming comb. The glider will scratch himself with this comb and then bring the foot around to his mouth, clean it, and repeat the process over and over. This syndactylous toe is typical of many marsupials. The ears are large, thin and hairless and are constantly in motion, moving independently of one another to pick up the smallest sounds. The eyes too, are very large and dark and are oriented towards the sides of the head to allow for a wider field of vision.

Sugar gliders are capable of a wide repertoire of calls that vary from bird-like chirps to dog-like barking. By far their most extraordinary vocalization is the one they make when disturbed in their nest. This is what we call crabbing. It defies description but sounds somewhat like those rattles they hand out at new year parties. Calling to one another is just one means by which they communicate.

To identify each other they rely more heavily on scent. Each glider has its own specific scent signature that other members of the group recognize. Males have a scent gland on their head which looks like a little diamond shaped bald spot in the middle of their forehead. There is another gland between their front legs on their chest. Females have scent glands near the genital area and pouch. Sugar gliders "shake hands" by rubbing themselves on each others scent glands. Despite the fact that they communicate by scent, they are not particularly smelly. You may occasionally smell a fruity musky scent, but it is not strong and is nothing like what you would associate with ferrets or skunks.

In captivity, sugar gliders are kept in large bird cages or aviaries. They sleep in nesting boxes similar to those used for birds. A mated pair may produce up to three litters a year with one or two babies per litter being the norm. The babies are easily tamed with regular handling. Two sugar gliders of the same sex will cohabit successfully if you don't want offspring, however, males will fight each other for dominance if females are present in the group. A healthy captive diet consists primarily of fruits, vegetables and dried cat food. They also enjoy live insects, pinky mice (bought frozen from the pet store), scrambled eggs, yogurt, nuts, fruit flavored pablum, monkey biscuits and fruit juices.

The sugar glider makes a fascinating and unique pet which becomes extremely friendly when provided daily interaction with humans. In order to become the friendliest possible pets, glider babies should be handled daily as soon as they have emerged from the pouch and their eyes are open. Their most endearing quality is the ease with which they bond to their human friends, especially when obtained at a young age (best if purchased shortly after weaning). Male sugar gliders reach maturity around nine to ten months; females shortly thereafter. If properly cared for, they will soon crave your attention. Being nocturnal, they are content to "snuggle" during the day in their cage or in your hand or pocket. During the evening, they become more active and will glide into your hand. Hand-tamed, well adjusted gliders are easy to handle and will not run away, even during their active periods. While all animals will bite when frightened or startled, even wild caught sugar gliders are unable to bite hard, and seldom draw blood (unlike hamsters or gerbils). Both male and female sugar gliders make excellent pets, with a life span of ten to twelve years, sometimes longer. In the wild, however, 4 to 6 years is the usual life expectancy.

Although reasonably easy to care for, sugar gliders require more time than most small caged mammals, and have some specialized needs. Before deciding to become a sugar glider owner, be sure you have the commitment and time your new pet needs. Sugar gliders are extremely social animals. In the wild, they live in large family groups, called colonies. Because of their social nature, pet gliders should always be kept in pairs or small groups. No matter how much time you plan to spend with your pet, you cannot replace the companionship of another glider. It is unnatural for a glider to ever be alone, and unfair to force solitude upon your pet. When housed alone, gliders are likely to become depressed, withdrawn, even defensive, and may refuse to eat and could eventually die from loneliness! If you aren't interested in breeding, same sex groups are able to get along. If keeping males together, they should be litter-mates or introduced at a young age.

In the wild, generally, only one or two of the males in the colony will father all the babies. When the young are weaned and able to live independently, most leave their birth colony, although some will occasionally remain.

The newly independent juveniles band with other gliders of around the same age and form a new colony. Some research suggests that these "offshoot" colonies are, in fact, an extension of the original group. During times of plentiful food, the offshoot groups have been known to rejoin the original colony in a large extended family group, creating what is sometimes referred to as a "mega-colony" of fifty or more animals.

Tame gliders can be let out to play in the evenings but they must be supervised; you will be surprised at how fast they can "jump" away from you! Tame gliders like to climb on curtains, play in the house plants, and just plain jump from place to place. Give them an opportunity and they will find a way to play in your house. Gliders can become very bonded to their owners and can often be trusted to ride on a shoulder or in a jacket pocket.

The charming sugar glider is fast becoming a popular household pet in North America. Indeed, they have many of the characteristics of the perfect pet in that they are clean, personable, attractive and relatively quiet. Their housing and dietary requirements are easy to cater to. They are hardy and don't have a lot of health problems. But while sugar gliders really do make great pets, think before you buy a glider and consider the consequences to yourself as well as the glider: Do I have enough time to consistently care for the glider? Can I provide the glider with a reasonably large cage? Can I afford the vet bills if my glider becomes ill? Is anyone in the household allergic to animal fur? How will existing pets react to a sugar glider? Will my husband/wife divorce me if I bring home another pet? While owning a sugar glider is a rewarding experience, it IS a long term commitment.